Posted under: How to's

PF Tek enables cultivators grow magic mushrooms from scratch. This certified method for psilocybe cubensis cultivation is easy, cheap and has a high success rate. We've noticed that a lot of Magic Mushroom Shop customers have been asking for PF Tek Instructions. In this post we will guide you how to prepare your PF Tek substrate and what you need to make a PF Tek cakes.

"PF-Tek is to the entheogenic experience what the hot water extraction is to the caffeine experience. People will be using it many centuries from now.” -Psylocybe Fanaticus-

With this manual you'll have a step-by-step overview. Everything will be explained: from the making of the substrate to the inoculation of the jars with spores and the cultivation of mushrooms.
Read the entire PF Tek Instructions carefully to learn how the PF-Tek method works and what you need to cultivate your own irresistible magic mushroom.

PF-Tek is a simple method to put together a reliable substrate for the cultivation of mushrooms. The biggest advantage is that the required materials are easy to obtain and you can prepare the substrate with household items. The complete list of supplies can be found here: List of materials

The PF in PF-Tek stands for Psylocybe Fanaticus and Tek for technique. The PF Tek is developed by Psylocybe Fanaticus, the American Robert ‘Billy’ McPherson. The substrate turned out to be the perfect soil for thepsilocybe cubensis mushrooms. There even are spores named after mr. Fanaticus: the PF-original. The PF Tek manual has spread around the world and is celebrated by many mushroom cultivators. It's simplicity has made it the most used method to create substrate cakes.

In this PF-Tek cultivation manual four jars of 240ml will be used. This size is easily colonized by the mycelium and it contains sufficient nutrients for multiple flushes of mushrooms.

You can use jars or glasses of a larger size, but the risk of contamination will be greater then.

The manual covers the following steps:

Making of the PF-Tek substrate

By mixing the ingredients in the correct ratio you will get the ideal cultivation soil for your mushrooms.
The ratio you use is 2:1:1. Two parts vermiculite, one part brown rice flour and one part water.

When mixing the PF-Substrate, use a bowl that’s big enough for all ingredients. Make sure the bowl is thoroughly clean!

Water, brown rice flour and vermiculite mixed? Then your PF-Tek substrate is ready!

Tip: Gradually add some water to the substrate to prevent it from getting too wet. You will have to adjust the amount of water, depending on the quality of the used vermiculite and brown rice flour. Higher quality absorbs more water. Make sure you do not add all the water at once to the PF-mix.

Filling the jars with substrate

Now that the substrate mix is ready it’s time to fill the jars.
1. Loosen up the substrate mix with a fork. Make sure there are no big chunks.
2. Put the substrate in the jar, till right under the edge. Do not trample it!
3. Add a layer of vermiculite. The vermiculite functions as a filter between the substrate and the air and will keep out micro-organisms that can contaminate the PF-Tek cake.
4. Clean the edge of the jar with an alcohol wipe or kitchen paper.
5. Cover the jar with the cover or with aluminum foil.*
6. Do the same with the other jars.

*Choose between aluminum foil or a cover to cover the jar. It is wise to prepare both before you start.

Cover: Use an awl or drill to make five holes in the cover so that later you can spray the spores. Make four holes in each corner of the edge and one hole in the middle. You can also make the holes using a nail and hammer.

Aluminum foil: Cut three strokes of 15 centimeters per jar. The foil has to be big enough to cover the top side of the jar. Use two layers of foil to cover the jar well (this is where you will pierce through with your spore syringe) but make sure you can take one part off easily.

Tip: Shake the substrate lightly to equally spread it in the jar. The substrate has to be airy so that the spores and the mycelium can spread easily.

The sterilising of the jars holding the substrate in it is a very important part of the proces.
The substrate has to be sterilised to kill any micro organisms to reduce the chance of contamination. Therefore it is important to do this well.

The sterilising can be done in two ways: with the pressure cooker or a regular pan. Both of these methods will sterilise the substrate by steam.

Sterilising  substrate in a Regular pan

Sterilising  substrate in a pressure cooker

Tip: Smell the substrate before and after the sterilising process. You will know what it smells like and you can later smell wether or not the smell has changed. A sour and strong smell can indicate a contamination.

Tip: Keep the jars for a maximum of one week on room temperature in a dark and draft-free place. Check the jars after this period for contaminations to prevent inoculating the contaminated jars with spores. Get rid of the substrate of contaminated jars immediately and disinfect the area and jar.

The inoculation of the substrate is the second part of the PF-Tek method. You will have to work sterile and carefully. Ensure you thoroughly clean the area you work in before injecting the substrate jars with spores. The usage of disinfecting gel for your hands and a respirator is recommended. You can also create a ‘glove box’ or inoculation space but this is not necessary if you proceed clean and sterile.

When inoculating you add the spores through a syringe to the PF-Tek substrate you made earlier. The spores develop to mycelium that will slowly colonise the substrate of the jar. Assume a 1 ml spores solution for one jar. You can also use more (2 ml), then the jar shall colonise faster. Spore sprayers contain 10 ml or 20 ml of spore solution, enough for 10 – 20 substrate jars. 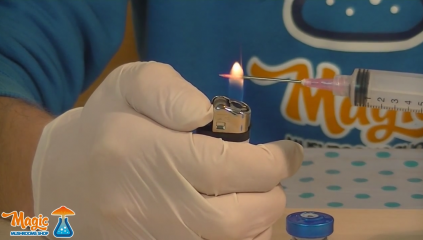 How do you inject the substrate jars with spores?

Now that the substrate jars are injected with spores you have to wait for the mycelium to colonise the entire jar. Put the jars away in a dark and draft-free place. Keep the temperature around 27 degrees Celsius. At a temperature below 15 degrees nothing will grow.

The entire colonisation of the PF-Tek substrate can take up to four weeks, depending on the conditions. After three to seven days you will see the first signs of the forming of the mycelium. You can recognize this by the white stains of threads that grow from the places where you injected the spores. When the entire content of the jar is white because of the mycelium it is best to wait one more week so that the inside of the substrate is fully colonised as well.

Check the substrate jars during the incubation period for contaminations. A contamination can be started by the different color of the growing mycelium. The mycelium is white, contaminations can be velvet, green, orange, black, bright yellow or gray. If you discover a contamination in a jar it is necessary to throw the substrate away immediately. Wash your hands thoroughly afterwards and disinfect the place and the direct environment of the jar. Take notes on which jar got contaminated, after how many days it was visible and how the contamination looks.

When the mycelium has colonized the entire PF-Tek substrate, the chance of contamination is very small. The mycelium, which is a living organism, will fight many contaminations by itself and tries to survive!

If the PF-Tek substrate has fully grown after four weeks and does not contain any contaminations it’s time for the last part of the PF-Tek method: preparing the substrate cakes for the growing of mushrooms. To grow mushrooms from the substrate you need to take the cakes out of the jar first.

Best conditions for the mushroom grow 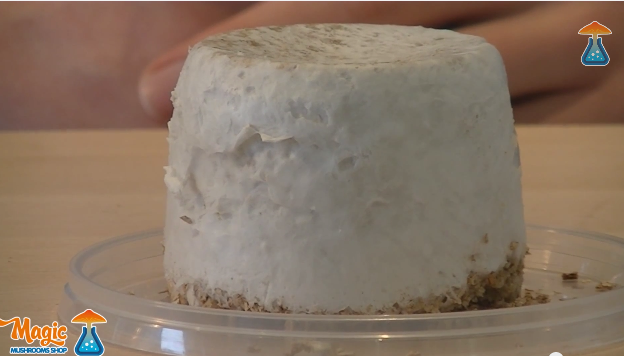 After one to two or three weeks you will be able to harvest your own mushrooms from your homemade PF-Tek grow kit!

After the first flush

Harvest every mushroom. Even the smallest. After the first flush you will have to soak the substrate cakes again for the next flush. This way the substrate will have sufficient moisture for a new flush of mushrooms.

Another method is to immediately soak the cake from the jar and roll it through vermiculite. There are mycologists who get better results this way. The vermiculite helps the moisture to dispose more gradually.

Tip: If you are using multiple PF-Tek jars you can experiment with both methods. Use the ‘Dunk and Roll’ method for half of your jars. This allows you to compare and find out which method works best for you.

Hopefully the PF-Tek manual has helped you create a successful substrate that will give you several good flushes of mushrooms. If you have any questions or comments about the PF-Tek method or the magic mushroom cultivation manual feel free to contact us here: support{a}magic-mushrooms-shop.com

Have a nice grow!