Posted under: Art and psychedelic lifestyle

Penis Envy is one of the most famous magic mushrooms strains. Maybe you are thinking that this is just because the name and shape are so remarkable, but this is not the main reason. The Penis Envy is a powerful variety of the cubensis mushroom, very appreciated by experienced psychonauts.

A level 5 magic mushrooms trip report: The garden, the stargate and divine communion: Surfing through the etheric hyperspace realms.

I was able to get a half ounce of an extremely potent strain of psilocybin mushroom called penis envy. Which I turned  into chocolates that I coined  "Mayan Gold" due to the gold foiled I wrapped them in.  Mayan Gold contains 2 grams in each chocolate (80% raw organic cacao bar).

I have done DMT, Salvia, LSD and psilocybin mushrooms before (level 3/4 experience) but none of those experiences even came close to this one on Penis Envy mushrooms

After planning this trip for a week with my friend Jason, the time had finally arrived, the evening of December 28th, 2014. It was a nice Miami Sunday. My friend Jason came over to my condo  and we debated for about an hour whether or not to take these. While I was very optimistic about the whole scenario, Jason was trying to reason with being realistic about time frames, set and setting.

After debating we decided to just not do them but then my shaman friend Z (who sold the Penis Envy to me) called right when we were about to call it off and convinced Jason and I to take the sacrament. We ate the Mayan gold with ease and started driving to this botanical garden for our journey. This was at 6:30 pm.

I took an extra .5 of raw mushroom because I had tripped on 2gs about a week prior.

(edit by MMS: PLease use caution on the amount of mushrooms you take. Read the magic mushroom dosage guide to know the right dose for you)

Jason started driving to the botanical garden that was visually stimulating and had really cool glass art throughout the nature trails. 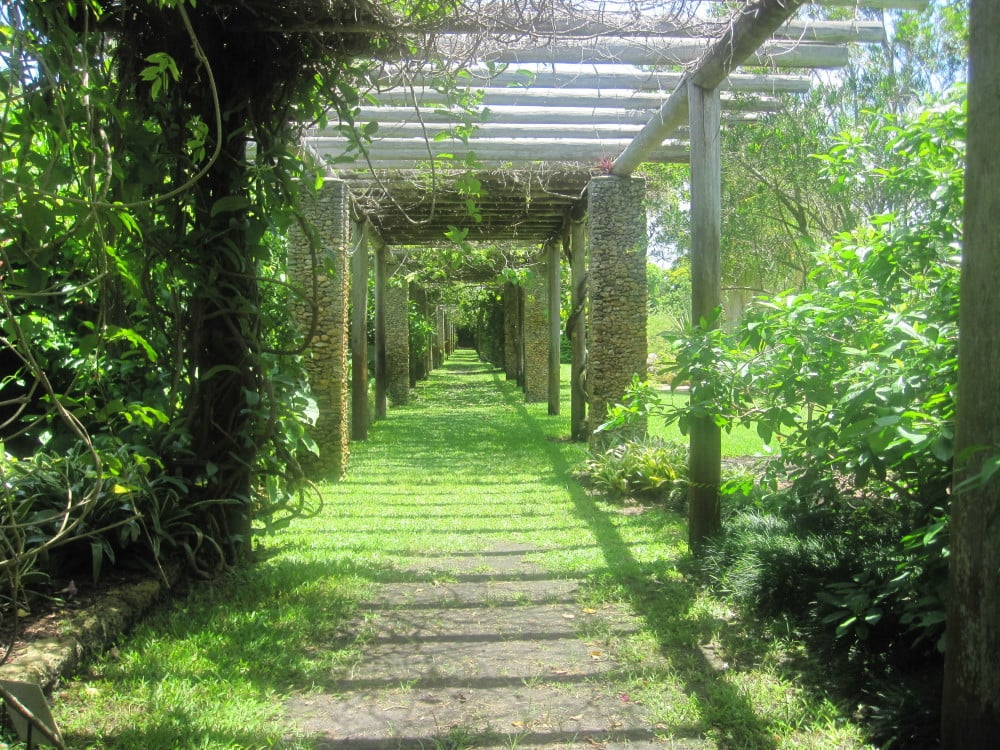 The Medicine hit me within 30 minutes and I was back to that dreamy shroomy place. We arrived to the botanical garden and after Jason used the restroom once they started kicking in for him.

I choose to trip at Fairchild botanical gardens to be in a rural environment but there was a point it didn't matter where I was because all the atoms of this dimension merged with other dimensions. We walked all the way to the end of the nature trail and found a bench under some welcoming trees. By this time (a little over an hour) the medicine kicked in hard. The physical third dimension started breaking down into minute atomical fractals and fused with the hyper etheric dimensions. All dimensions were indistinguishable from each other and defied linguistic explanation.

At one point I closed one eye and left the other open to experiment. I was halfway in my inner dimension and the outer dimension but then it got to a point where it didn't matter. Eyes opened or closed, I was completely transfigured and enveloped within hyperspace.

All of the dimensional realms were macrocosmic and microcosmic at the same time.  we surfed the universe and the atomic world basking in the infinite with the help of some entities. I gave myself completely and wholly to the infinite source of all creation and emanated the vibration of unconditional love and pure gratefulness to the presence of the ancient eternal. I was in complete awe and bliss.

Disconnected from my body with 360 spirit vision. It felt like I was initiated and became a benevolent entity myself as if I was privileged to surf the sacred dimensions. I thought I've astral projected before through deep meditation but this was the real deal.

There was one transcendental being I met and remembered vividly. The being materialized, within the light encoded dimension and came down upon me to greet me. It's head was huge and cone like, and took up my whole vision. It peered deep into my soul. It had an oval shaped head with photonic fractaling eyes making up its existential structure and being (think "Steeple Head" by Alex Grey).

This interaction took place for a short period before we bided our farewells. My CEV (closed eye visuals) were extremely intense [and Mandelbrot like] so i decided to walk out about 50 feet into a moonlit pasture by a lake. 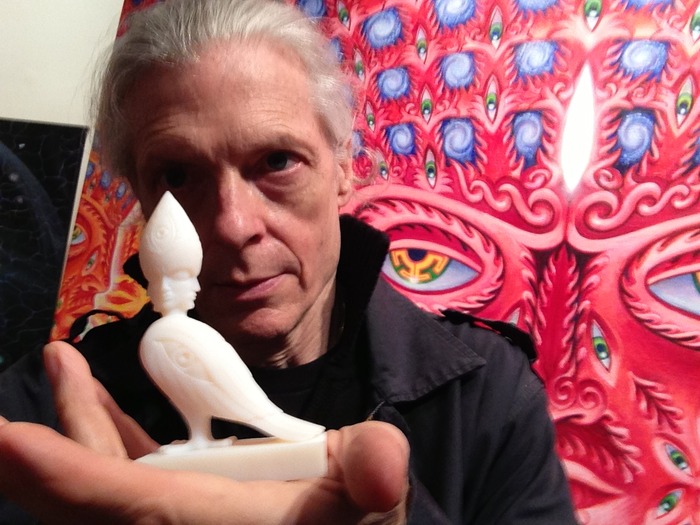 When I looked up at the moon and the whole sky was melting and swaying away. The stars were extremely vibrant and almost felt like they were saying hello to me. The light from the moon became so complex as it was shinning down and started forming transparent Merkabahs (or some by-product of metatrons cube) of light all around the earth. I decided to walk back to the bench which was now a stargate.

As I sat back down on the stargate bench and drifted off, I felt the psilocin ripping through every cell until the density of my physical body dissolved away as I became a full light body again. I then transformed into an entity of light-spirit/energy and was surfing through hyperspace. The only way I can describe the hyper space environment is to compare it to those scenes from the matrix where everything becomes a green tinted computer reality code, except it was constructed of infinite sacred light matter, living geometry and God's presence.

The revelations of the Penis Envy

During this state I became aware of the driving power of intentional manifestation. I realized how thoughts can permeate our realities at a quantum level to affect and attract people and events around us that are karmically charged with our own intentions.

As I was astral projecting through this hyper dimension(s) I came upon a community.  The community was city like, made of energetic emeralds, jewels and fractals. It was a society for entities that dwelled there and felt like I was on a hyperspace highway just hovering by this city of light.

It didn't matter what position I was in physically because my astral body took no form, in fact I lost complete contact with my physical form and only knew my astral form for some time. Then I experienced complete ego death, melting and stripping away my mundane layers until I was reborn again spiritually.

I met many entities. Good and bad. I remember when Jason started talking about how he sees evil entities as well and my awareness shifted to these beings who were in disguise and then revealed themselves in the hyperspace void. I greeted my demons and instead of fighting them, I accepted them as part of my reality and they subsided shortly. They took the form of humanoid elf/jesters with menacing grins.

Time was non-existent and non-linear so I felt as if I could time travel and had intentionally navigated thousands of years back, etherically, to an emotional coordinate in space and time where my soul and Jasons soul were interacting at some point. The image of Mesoamerican shamans sharing the same grand experience with the psilocybian mushroom surfaced.

I also became aware of the complex transition of spirit into flesh. I felt as if I was in a "waiting room" where souls await to choose their incarnations which they are karmically attracted to. Images of sacred patterns and merkabahs flooded my minds eye in this "waiting room". It all made so much sense.

As I opened my eyes to check the time, I realized it was 9:30pm. The park closed at 9:00pm and we were past due to leave. I told Jason that we had to start collecting ourselves and gain some composure. It was time to leave the stargate bench and head home. Park security had been patrolling and we knew they've seen us.

As we walked to the car, we were faced with another reality; driving back home. Jason was freaking out about this... I didn't blame him. Our realities were still warping out of control. We couldn't even figure out how to turn the radio on. I then told Jason to trust God, the mushroom and the spirits to guide us back safely.

The first 15 minutes of driving were so extreme. Lights, roads, cars, trees and everything in our vision was melting into each other. It wasn't making sense. We had to focus on the lines on the road a few feet in front of us to drive accordingly.

Once we got to Coconut Grove (15 min later), traffic slowed down and our realities were not as hectic. Things started to simmer down. We finally made it back to my condo in Brickell. We smoked some herb around this indigenous sacred site called "The Miami Circle" (connected to my building) which is famed for being one of eastern United States most prolific archeological discoveries. I somehow felt the spirits of the Tequesta natives with me as we sat around the circle and smoked. Jason was then good to drive and we said our farewells.

"Since that day, I haven't been the same"

I went into this journey with the intention to engage a sacred communion with transcendental intelligence and higher realms of existence to integrate knowledge into my life. Liberated. I wish I was exaggerating about my experience but to be honest I'm barely scratching the surface. When you believe when you are ready to see the truth, the higher spirits will show you.

Ever since that day, I haven't been the same. I feel many of my egotistical layers have shed off. I am more carefree. My senses and vibration feel more heightened, my dreams are more lucid and vibrant. Perspectives and priorities have completely shifted. The sacrament has healed me in many ways. From now on I will only take the hallowed mushroom in a spiritual, medicinal and shamanistic manner. I feel these are not meant for recreational use to consume at parties and watch carpets and walls move. This is solely meant as a gateway into the celestial domains [if enough is consumed with the right mindset].

I strongly feel that if our new age ways could learn to use the sacred mushroom for divine communion with the ancient eternal we can initiate a rapid launch in the evolution of consciousness and also strip away the layers of the ego which could subsequently lead us closer to our true selves and a better world.

Thank you Stephen for sharing with us this wonderful magic mushrooms trip report.

This entry was posted in Art and psychedelic lifestyle and tagged penis envy, report, trip, magic mushrooms on February 16, 2015 by mickmycelium. ← Previous Post Next Post →